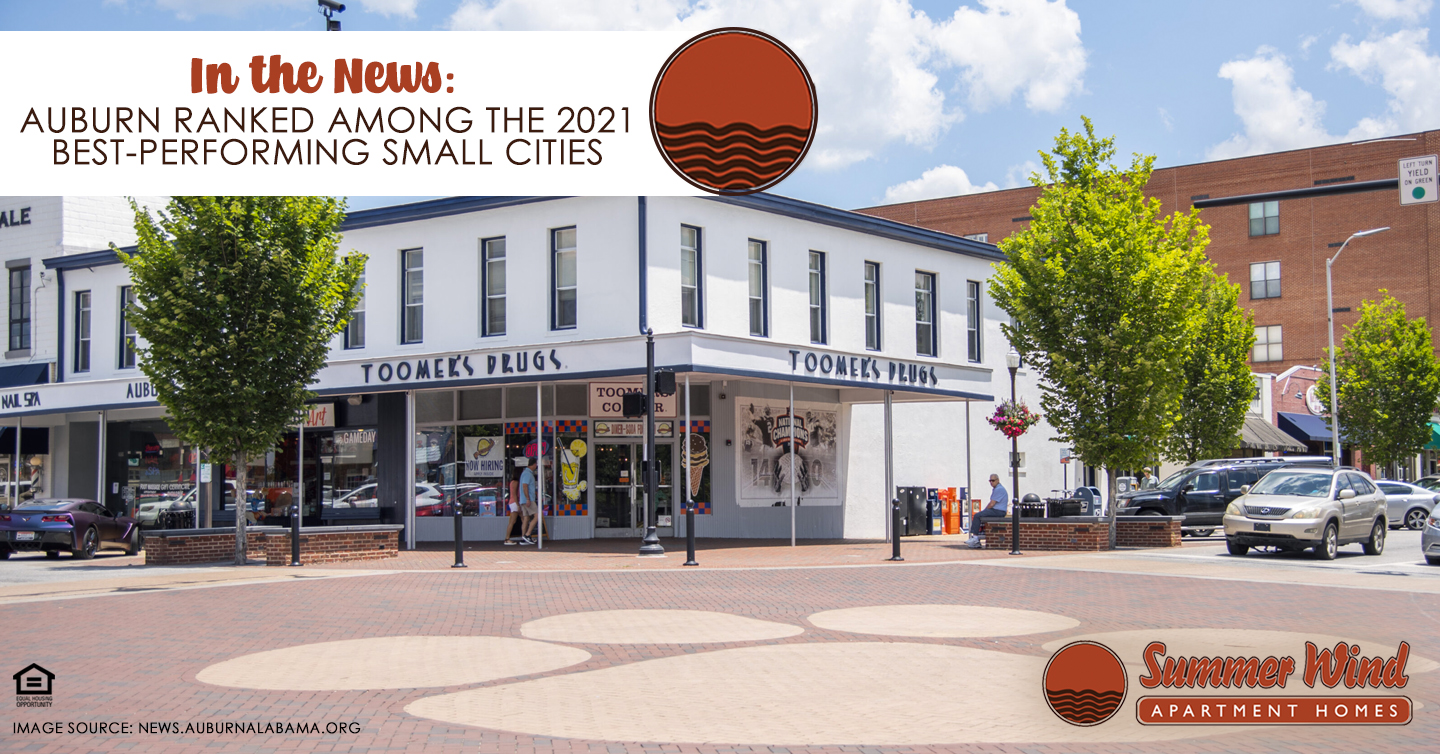 Have you ever felt lucky to be living in Auburn? Turns out, you are! Recently, Auburn ranked among the 2021 Best-Performing Small Cities according to the Milken Institute.

What does that mean exactly?

Since we just told you Auburn ranked among the 2021 Best-Performing Small Cities, you may be wondering just what that means. The cities are evaluated and graded on specific metrics based on the Milken Institute’s Best-Performing Cities Index (BPC). These metrics focus on the areas of job creation, wages and technology.

This year, two new factors were added: housing affordability and access to broadband. Another new angle this year is how the cities are grouped. Typically, there is a top 25 for large cities and top 25 for small cities.

In effort to help city leaders and officials create benchmarks for improvement, the Milken Institute decided to create five tiers that group metros with similar stats.

Without further ado, Auburn classified as a Tier 2 Small City, ranked 17th out of the 201 small cities evaluated. That is a six-point increase from 2020’s ranking of 23!

It was noted in the full report that what stood out about the Tier 2 cities were the areas of job creation and wage growth. The outcomes also noted that among the small cities, the addition of the two new factors of affordable housing costs and access to broadband did not significantly affect the rankings.

While Auburn ranked among the 2021 Best-Performing Small Cities at number 17, it was not the only Alabama city that made the cut. Huntsville, AL, was ranked 10th in the Tier 1 Large Cities category. Daphne was ranked 5th in the Tier 1 Small Cities listing. Auburn comes in second at 17th followed by none other than Tuscaloosa at 29th.  (Yes, true Auburn fans want to “Beat Bama” at everything!)

More About the Milken Institute

Self-described as a “nonprofit, nonpartisan think tank,” the institute is on a mission to help solve global issues. They are on a mission to give all people a chance at a meaningful life. A life full of well-being and health; the ability to pursue education; and be connected with the resources needed to achieve these goals.

Studies and rankings such as the BPC create those metrics that help citizens understand and evaluate how their hometowns measure up in terms of economic vitality.

Strong economies lead to strong communities. Auburn is a special place with much to offer a diverse population. If you are considering a move to this best performing small city, you can take small steps! Be part of the collective that goes for the affordable housing. Find all you need on budget at Summer Wind! Find out more about life on the Plains by reading our blogs!